A stranger in the kitchen. That was my first impression of Rémi. I didn’t know how to politely phrase the question ‘who are you and what are you doing here,’ so I assumed he was related to my AirBnb hosts, a cousin or something. We had a whole conversation before I realized he was just a guest like me. In Cannes for a week from Bordeaux, he would complete a weeklong stage for his new job, the training period required before he begins in January and moves here for the year.

Both in our early twenties and new in town, we struck up an easy rapport, making our respective dinners at the same time and walking around Cannes together. In the middle of the week was le Toussaint–all Saint’s Day–and Rémi had the day off. He asked if I wanted to go somewhere.

I thought of places Erika and I had visited that he might like. “No,” he said, “let’s go somewhere new for you too!”

Kind soul. I thought out loud about where we could go by train.

La classe! Clearly I had been “roughing it” for too long. En voiture, the possibilities were endless.

We met early the next morning. Rémi hooked up the GPS, while I sat in the passenger seat thumbing through a Lonely Planet guide for Provence-Alpes-Côte-d’Azur.

I fell on a page about the Gorges du Verdon: “Europe’s Grand Canyon.”

“Have you heard of this?” I read him the description, then typed the address into my phone. It was only thirty miles away, but the drive we’d need to make, winding around mountain roads, was predicted to take over two hours.

“Is that okay? What do you think…” I really wanted to go, enchanted by those turquoise waters, but I tried to hide it. If he didn’t want to, I understood. It would be a lot of driving time for a last-minute day trip, and we wouldn’t be able to trade off. (I thought of my one disastrous manual driving lesson the year before).

Rémi responded with that most French expression of enthusiasm: a shrug. “What’s the address?”

It was a proper road trip: windows down, blue skies above, and the radio cut by static. In the space of an hour, our setting evolved from beach town to classic autumnal landscape to the ear-popping heights of the mountains.

We passed pastures of goats and sheep and plenty of warnings to watch out for wandering members of the flock.

Civilization became more and more scarce, but no matter the elevation, one thing was sure: even in the boonies, there would be no shortage of festivals.

Signs alerted us to the existence of fêtes celebrating everything from chestnuts to…donkeys. As you might expect from a country that loves champagne and celebration, France has a festival for everything. Some seem a bit…unnecessary (yay garlic. Yay orchids), but even the small ones are excuses to get together, eat, drink, and buy things you don’t need. And what’s not to love about that.

We were almost there, and I was more than ready, my stomach pleading with me to find solid ground. The comically tight, twisting roads were nauseating, as was the view (in a beautiful way, of course).

There were bikers (there are always bikers, tough as nails), and I would’ve stayed in the car all day before trading places. Their uphill plight looked like one of the circles of hell.

We passed crêperies and tiny pizza shacks squeezed onto the side of the road. Some had outdoor seating: the chairs lined up near the edge of the cliff, nothing between the casual diner and the abyss but a weak fence. One pizza margarita and a side of dread, s’il vous plaît. 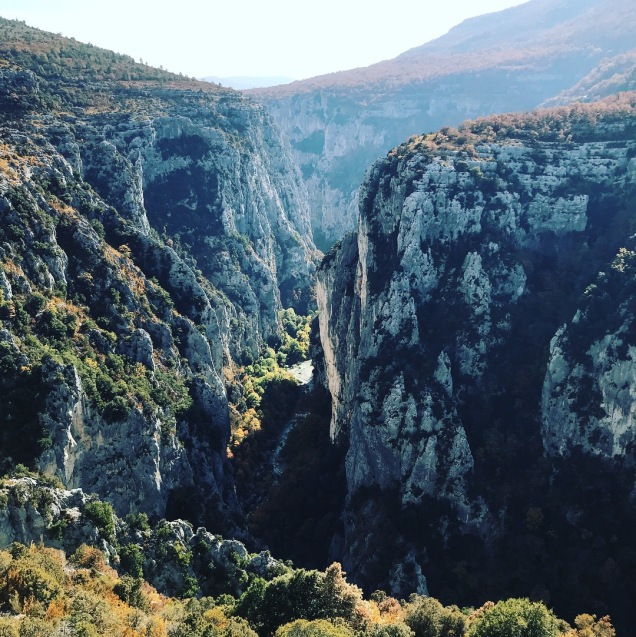 We stopped to breathe and stare over the edge for awhile. Ultimately though, we wanted to get to Lac de Sainte-Croix. More driving. 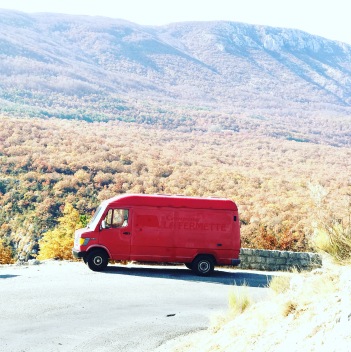 It was worth it. I had never seen fresh water this shade of blue: from deep-teal to turquoise to swimming-pool-acqua depending on the light and on the depth.

We watched people set out in kayaks and paddleboats.

Signs on the bridge warned swimmers from jumping. I was interested to see that the biggest danger cited was not the chance of landing wrong, or hitting a rock. No, jumping was a really bad idea, apparently, because of the high chance of getting stuck in the clay at the bottom of the lake. And drowning. To further dissuade, the signs listed a death toll. 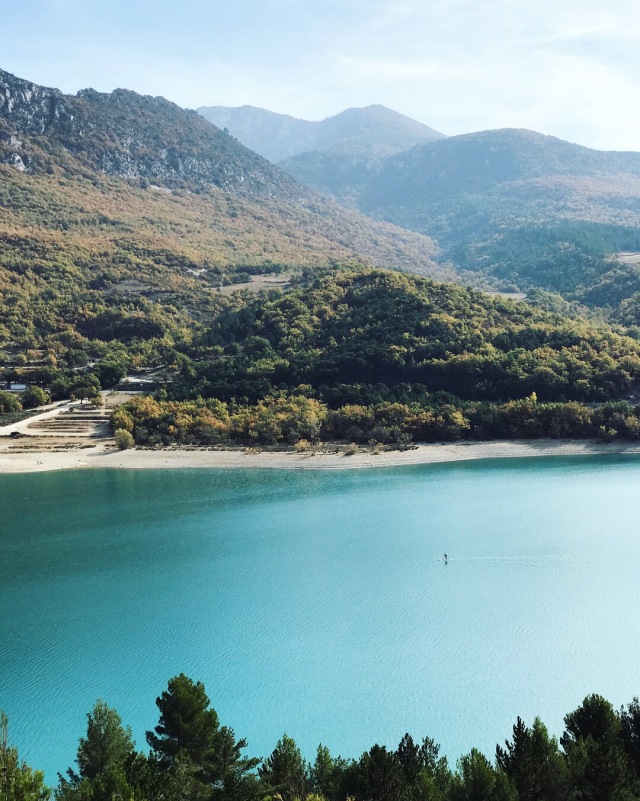 After driving, walking, and sufficiently appreciating the natural beauty, we were ready to find something to eat.

We drove away from the gorges and the lake and through a number of tiny villages perchés. They were postcard-charming…and postcard-still. Everything was closed for le Toussaint. 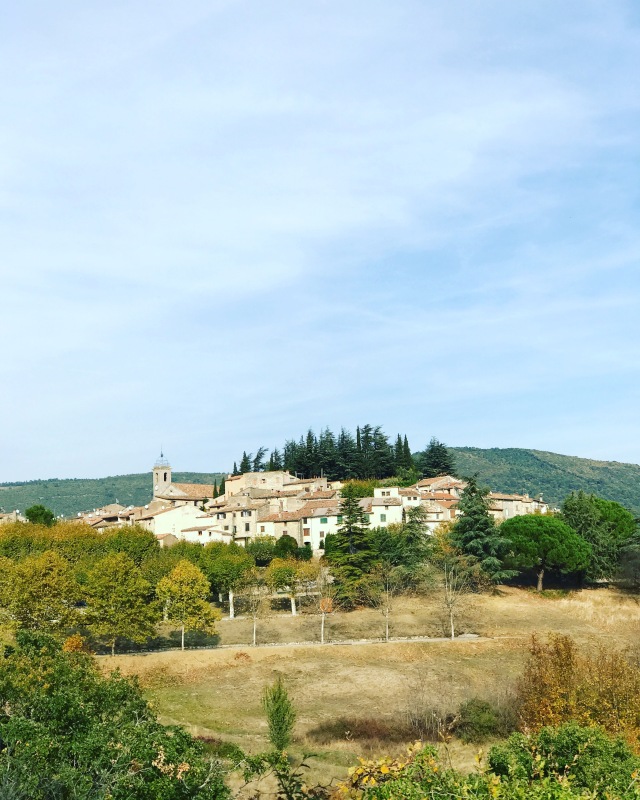 It was a hungry trip home to Cannes, which may have influenced my opinion of the pizza we eventually procured: absolutely delicious.

7 thoughts on “shades of blue: falling for gorges du verdon”

🐒 Embroidered this little monkey on Clara’s dress, to match her jungle cardigan. #embroidery #embroiderybeginner #lapetitefabriquedebroderie
Another day, another @bonappetitmag recipe hastily put together while Clara naps. ✅ Leftovers with curried peanut sauce + the jammy eggs I just learned how to make.
Ma première petite broderie. ✨ @roseceladon #lapetitefabriquedebroderie #embroidery #beginnerembroidery
New Key Energy 🌃 🏡 🔑 #crosstitch #moderncrossstitch #homesweethome
Exploring tiny ethnic markets is my love language. 💃🏻 Here’s a haul from the newest one we found, a little Japanese/Korean place where we grabbed, among other treasures, boba for homemade bubble tea 🍵
💥
%d bloggers like this: