That is my first impression, both times I’ve visited. Passing from the dark train tunnel and into the light, I see a scrubbed-clean city, feel the sun on my shoulders, and hear the many proud flags whipping in the breeze, the red and white color block stark against the blue sky. 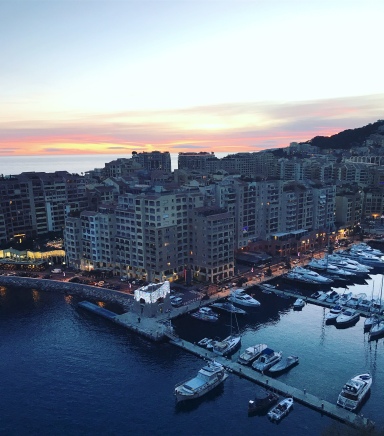 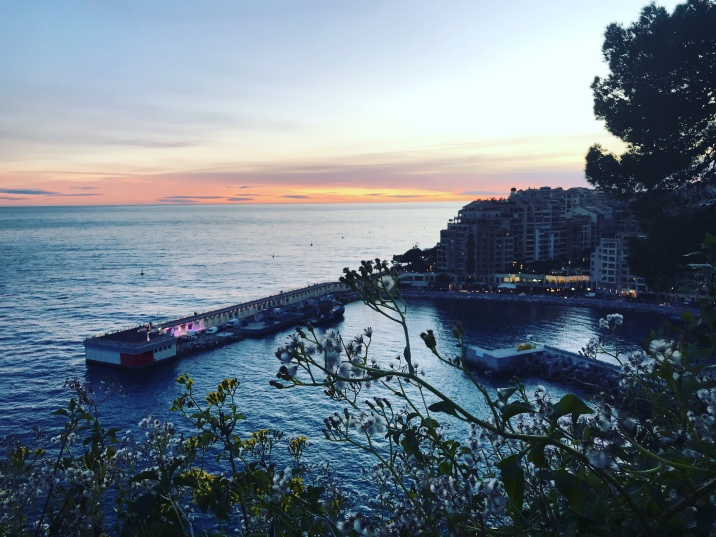 These are, of course, the impressions of a mere visitor to this independent city-state, the second-smallest country in the world, of which millionaires comprise thirty percent of the population. I won’t pretend to know how much everyday life here could differ from where I live (or anything else, really). But I do know this: it makes for one hell of a walk.

From the train station it’s a quick climb to Monte Carlo Casino. Climb is surely the word: it’s unavoidable unless you know where to find the public escalators, established to make the hilly terrain more navigable. I’ve only seen a few, but there are 35 total: a great deal for a country the size of Central Park. Perched right between the mountains and sea and highly developed, Monaco has no agriculture to speak of: there’s simply no room.

The climb up is lined on the left by designer stores, labels with enough classe to entice with bold and cheeky window displays. Sometimes ridiculous, still they are fabulous (it must be admitted). There are skulls and metallic balloons and sea creatures, high heels like an art piece. These displays wouldn’t be out of place at the Pompidou.

On the right is the bay, and then the sea. 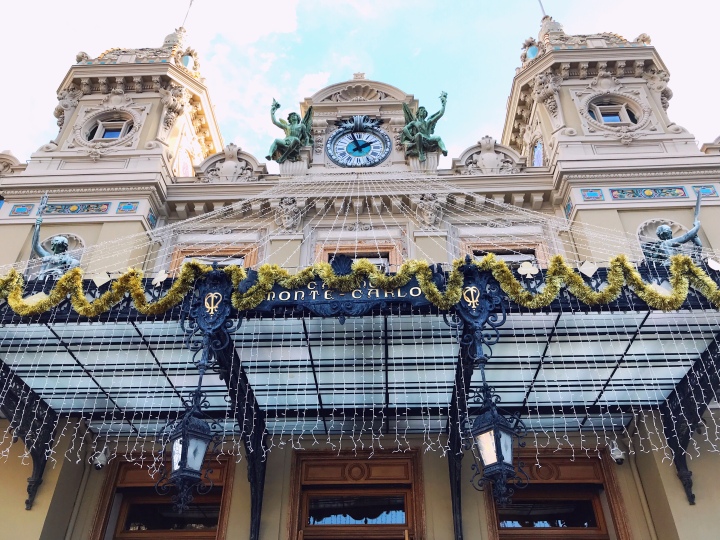 Entering the casino, I saw that the atrium and rotunda, which visitors are free to explore, were dressed for the holidays: draped in red and white diamond-patterned fabric. Artist Charles Kaisin designed the temporary installation to evoke both Monaco’s coat of arms and card games. The effect–to this viewer, at least–was of a surrealist dreamscape: something between Alice in Wonderland at Christmas and the Twin Peaks Red Room. 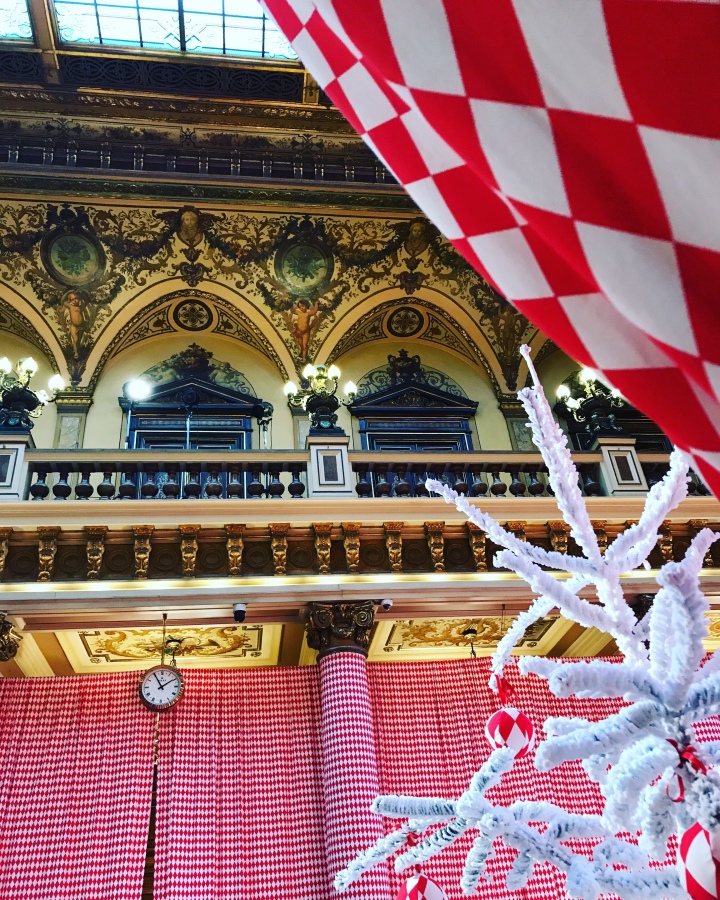 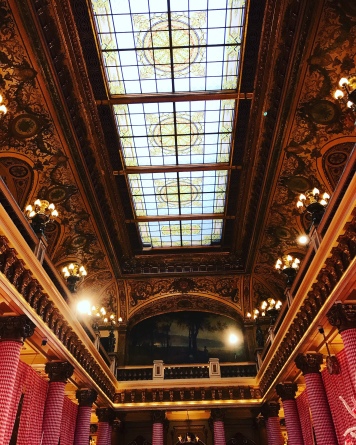 Outside, palm trees and fake snow mingled with giant dice, the mirrored faces reflecting the blue sky and few clouds above.

Back down the hill, I stopped at the Christmas market for a Savoyard burger. It was 63 degrees out, but the cold-weather Christmas kitsch lived on: a scary grinning Santa spun in a slow circle, children dressed as gold stars danced through the market, and the voice of Bing Crosby rose above it all. Stands sold plates of raclette and confit de canard, and a large pig turned on a spit.

My next stop involved a climb up the opposite side of the bay to the Musée Océanographique, an aquarium and museum set into seaside rocks, founded in 1889. The building is grand and palatial, with stately staircases, big windows, and the occasional giant squid hanging from the ceiling. 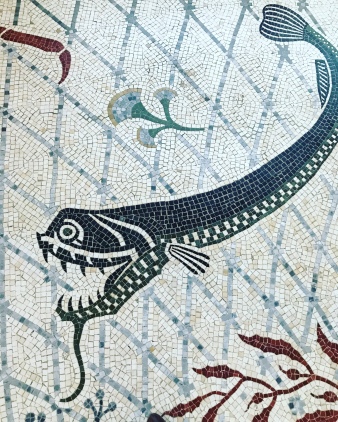 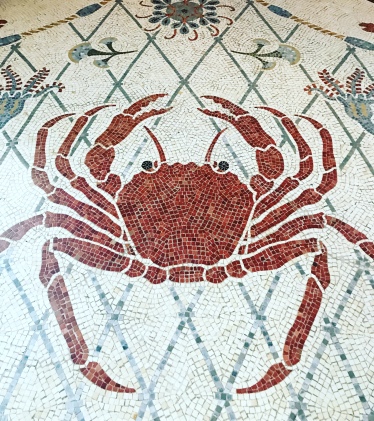 Downstairs in the darkness is the aquarium, where I saw piranhas and parrotfish and came face-to-face with the spectacularly ugly moray eel. I found a seahorse that wrapped its tail around a plant and hung upside down and a tank of bright clownfish as tiny as goldfish crackers. Starfish of all colors and sizes stuck like wall clings. I watched the jellyfish for a long time as they twirled around their ring-shaped tank, trailing their tentacles behind them, as translucent and impossible as ghosts. 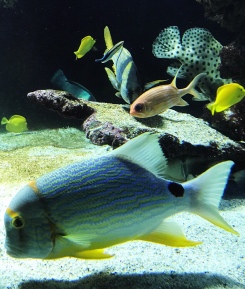 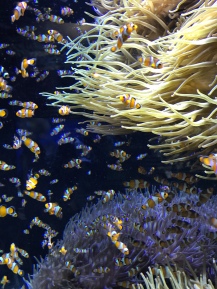 Upstairs, in the Salle de la Baleine, the skeletons of sea mammals dangle overhead, poised in graceful flight. From their plus-sized skulls protrude long jaws with sharp teeth, and in the case of the narwhal, a fearsome tusk. Elegant and enormous, the specimens might drift away at any moment, inhabitants of some undersea underworld.

Outside the museum sits Jacques Cousteau’s mini submarine. Cheerful and yellow, its cuteness belies its significance. Built in 1966, it could reach a depth of 100 meters.

I continue my walk in the Old Town, quiet streets where graffiti and trash are notably absent, an area that also holds the Prince’s Palace of Monaco.

Suddenly twinkling with light as night fell, sparkling a soft pink, le palais recalled my first visit to Disneyland last fall. It was a fun, memorable day with a best friend, but wasn’t what I would describe as magical: not the long lines or screaming children or people stepping on the back of my shoe. The main attractions struck me as unsettling. A man-made mountain. A castle with no history: no bloodshed, no strife, no monarchs born behind its walls. (It is the Happiest Place on Earth, after all). I thought about castles and cathedrals I’ve visited in France, hundreds or thousands of years old. I thought about Paris, its patchwork of struggle and triumph and cobblestone, and then about Tianducheng: a Chinese replica of Paris in the suburbs, complete with an Eiffel Tower copy, created to cash in on francophilia.

There’s a difference. I tried to appreciate what I saw on a purely aesthetic level, but felt about fifteen years too old for that. Old enough for X-ray vision: I could almost see the sweating, tired human inside the Goofy suit. Maybe that’s when the magic goes. The beauty for beauty’s sake (for profit, really): it didn’t quite work for me. It happens all the time, I suppose, but rarely is it so transparent.

Monaco, like Disney, is pastel and lovely and speckled with flowers, but it’s real. It too has a palace that lights up at night, only this one dates back to 1191.

I finish my walk as the sun sets, sparking color in the sky. It really is beautiful.

I’m no idealist. If I lived here, I know real life would surely creep in, like anywhere, the haze of la vie quotidienne dulling the wonder. Often, the scarcity is what makes something magical. It’s amazing to what extent we can become accustomed to beautiful things: whether that be love we take for granted or the Mediterranean sea on our doorstep. The New is easier to appreciate, with its power to surprise and delight, just when we thought we couldn’t be surprised again. Of course, nothing can stay new for long. 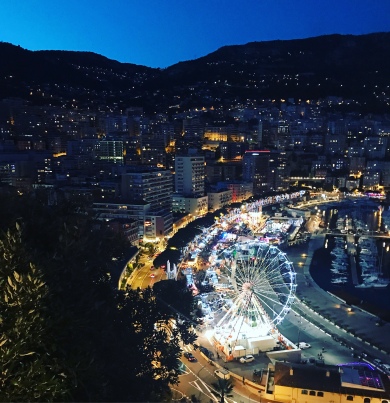 That’s what I remind myself. Living in Monaco would be like living anywhere. Maybe with a better view.

But on a day trip, walking the paths overlooking the bay and the sea, wandering amidst the soft pastels of the Old Town, feeling the warm sun and crisp breeze and watching the lights click on as the sun sets, I forget that for awhile.

6 thoughts on “mediterranean magic: a walk around monaco”