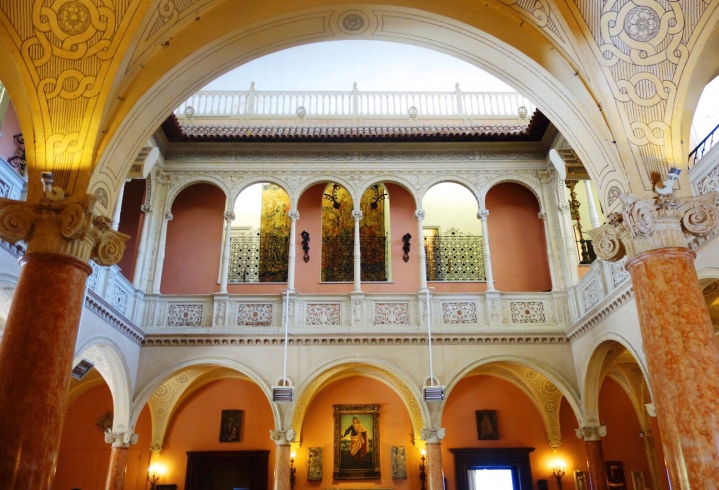 In 1905, Baroness Béatrice Ephrussi de Rothschild, heiress to a banking fortune, was so wealthy, restless, and enamored with the color pink that she oversaw the construction of a bubblegum mansion overlooking the Mediterranean Sea. 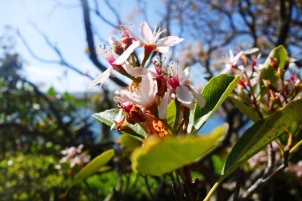 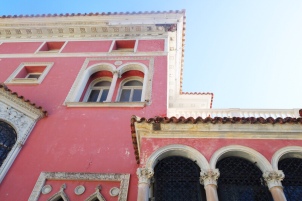 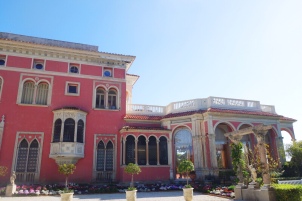 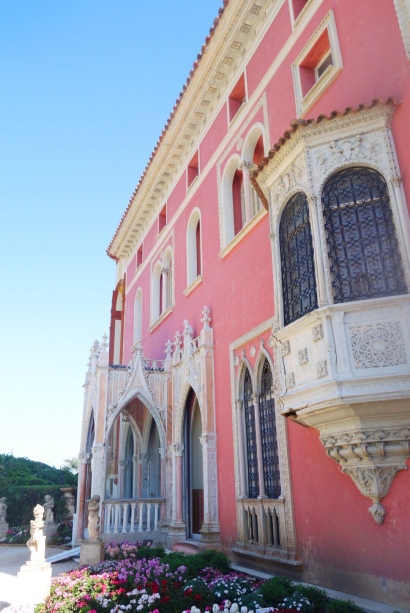 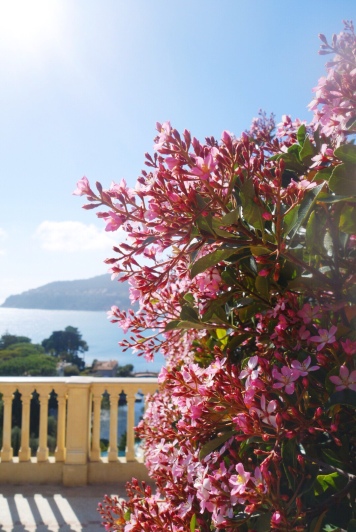 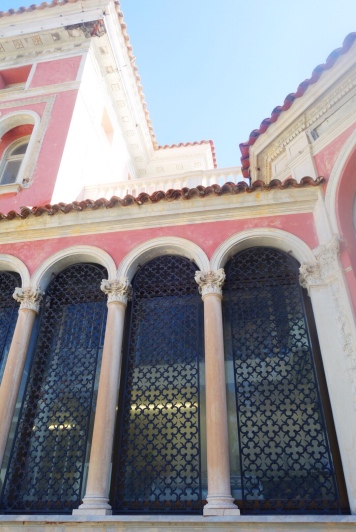 A native Parisienne, Béatrice warmed her new summer home with splashes of her favorite color. It was everywhere: from the eye-catching exterior paint to the marble columns to the roses in the nine surrounding gardens. Villa Ephrussi de Rothschild was a veritable island of pink: 17 acres of la vie en rose. 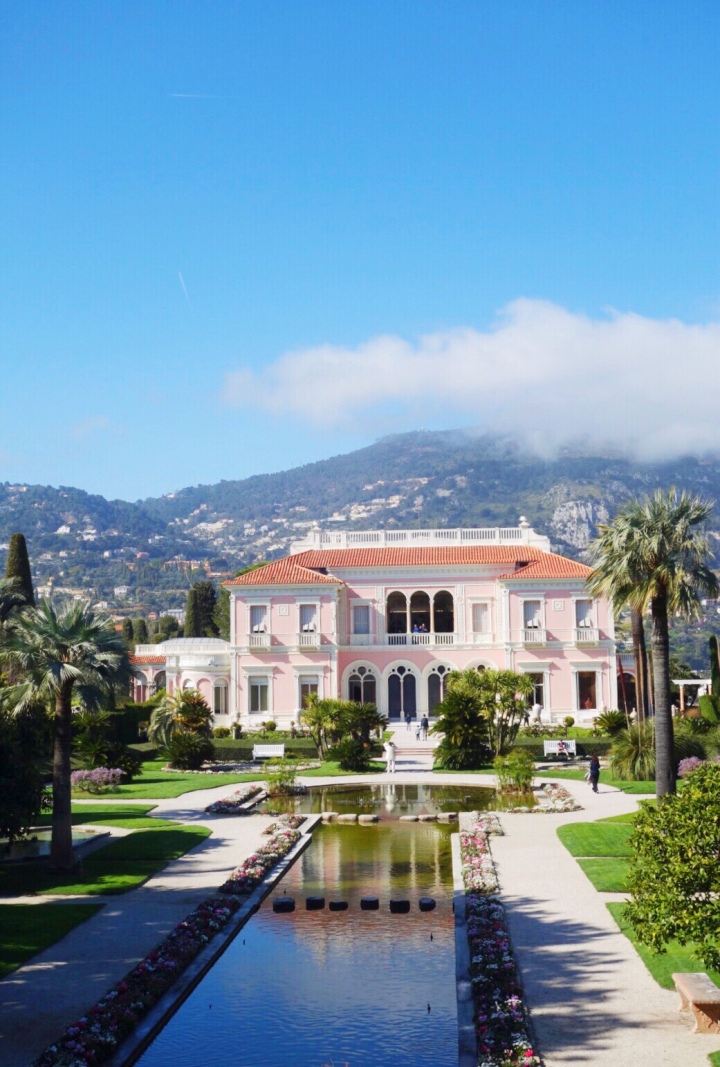 Béatrice filled her winter home with art from her personal collections and established a small private zoo, featuring such exotic specimens as mongoose, gazelles, and–naturally–pink flamingos.

The villa sat on a cape, so Béatrice could enjoy a view of the sea from almost any window. The nine gardens were themed in a display of worldly botanical abundance, from Spanish to Florentine to Japanese. No less than thirty gardeners worked to maintain the property. They dressed as sailors to further the comforting illusion of the villa and gardens as adrift on a lazy sea. In fact, Béatrice called the property the “Ile de France,” also the name of a grand ship on which she had traveled. 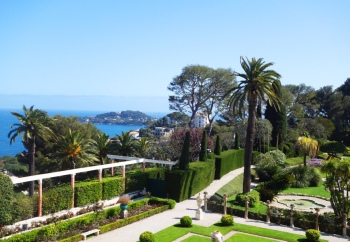 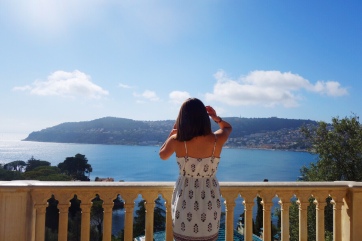 Béatrice knew how to throw a party. And like the classiest of hosts, she was inconspicuous, though the poet Andre de Fouquières wryly described her fêtes as  “generous.” He noted one particular image that stuck with him: that of Russian prima ballerina Anna Pavlova dancing in the gardens to Chopin nocturnes, “bathed in moonlight.” 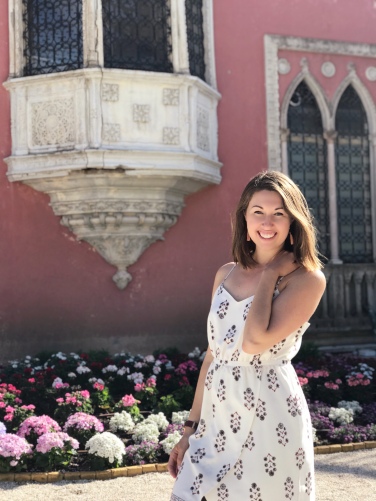 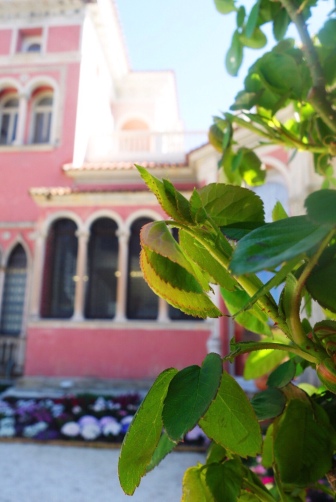 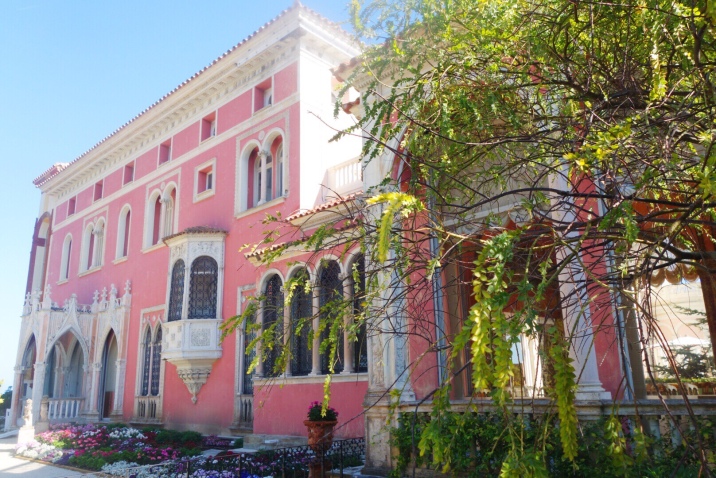 On my visit to the villa, it was tempting for me, a mere peasant, to dream myself into this world. Baroness Béatrice’s pink confection of a house brought to mind the Barbie Dream House I had as a little girl. Complete with a working elevator, it was magic itself. And here I was in the South of France twenty years later, staring at a much bigger pink house, this one a delight to my grown-up heart. 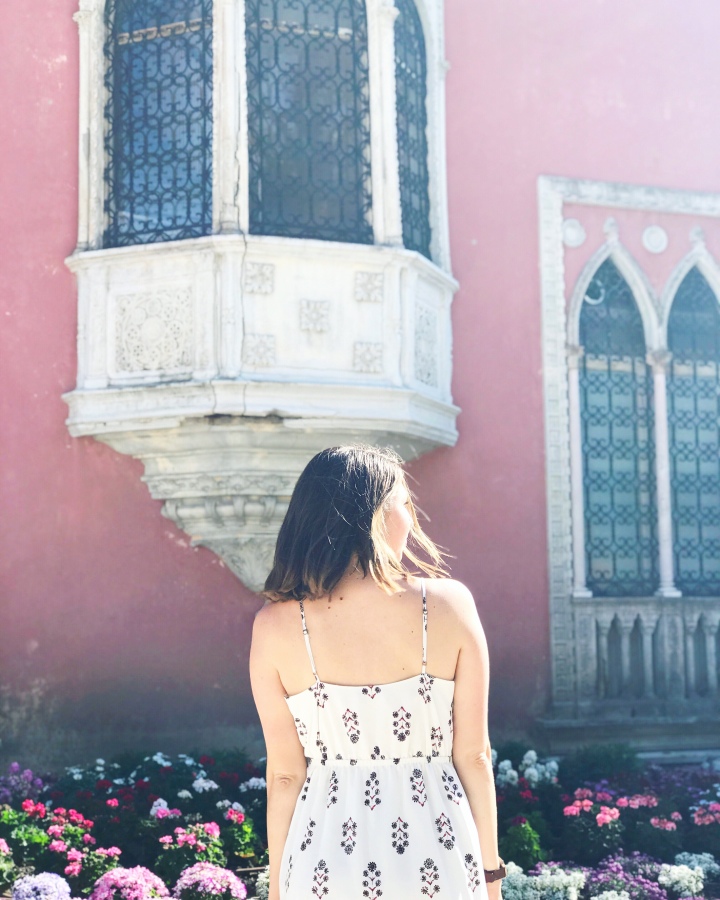 There were no flamingos and I didn’t spy a single gazelle, but there was a fountain choreographed to elegant classical music. There was a café with a garden view, where you could linger over tea and a luscious tarte aux fraises. 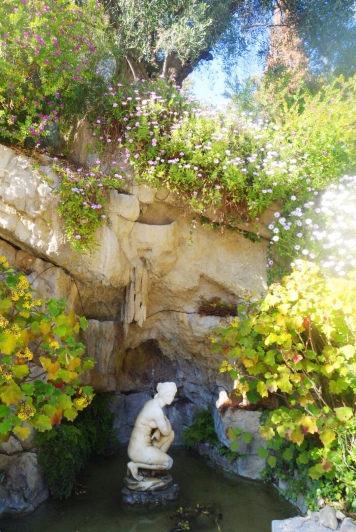 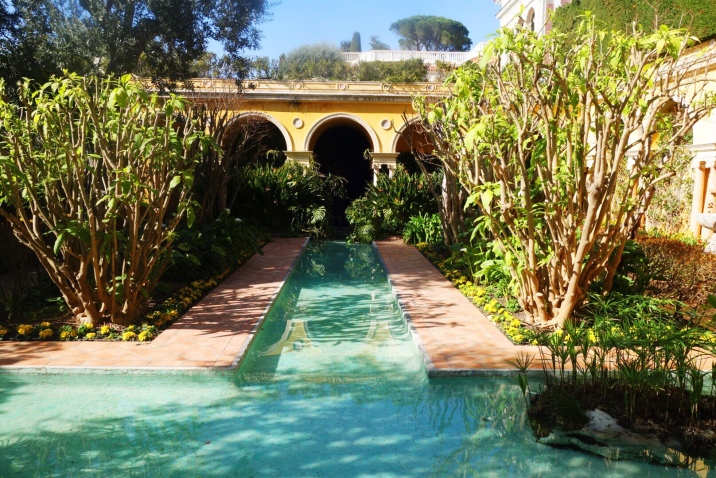 I imagine living with so many choices, so much power. I imagine hosting parties lit only by the moon and tiny candles placed in the garden. I imagine swans in the fountain. Shimmering necklaces that lay heavy across my collarbone. Piles of exotic fruit topped with fresh chantilly. A treasured white mare brought by sea.

But I must keep my feet on the ground. On my feet, anyway, are heavy Vans hi-tops. They clomp on the aging wood floors, floors that squeak and tilt just a bit. They slap inelegantly on marble patterned with pink and white diamonds. I walk through intimate rooms where people once slept, now open to me and my camera and my sneakers. The rooms are still furnished with mirrors and bedding and vases of fresh flowers and might have seen all kinds of human emotion: joy or strife or simple boredom–a world-weary party guest staring bleakly out the window. There was life here. What are my Vans doing stomping through this early 20th-century glamour? Suddenly it looked so strange and anachronistic that I laughed. 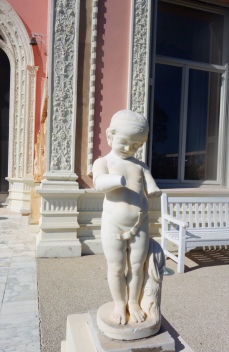 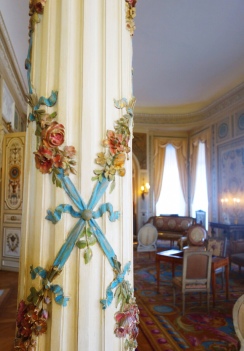 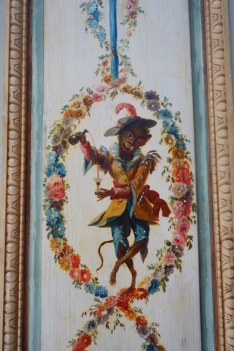 Baroness Béatrice Ephrussi de Rothschild died in 1934 and was buried in La Père Lachaise in Paris. She bequeathed her property, all of it, to the Institut de France for the Académie des Beaux-Arts, and wished her home to be reopened as a museum. “It is my wish that as much as possible the museum keeps its current appearance as a salon.”

Would she have been pleased? Here there is dust, there, a chip in the paint. The villa remains grand, but the subtle decay is undeniable. Slowly going the way of all things.

Exploring places where people have lived tends to make me consider mortality.

A palace or villa or château that has outlived its owners does a much better job bringing the dead to life than does a graveyard, with its sober finality. These empty spaces evoke a bittersweet melancholy. 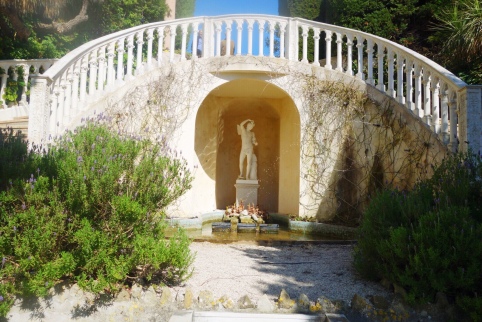 Look at these treasures, stored where “moth and rust doth corrupt,” already succumbing. Look at the owners–gone. Look what they took with them–none of it.

I am again struck by what terrible predictors physical possessions are for happiness.

Who was this eccentric woman, really? Was she happy? What did she long for? Did she know love? Did she find truth?

History remembers her…is that a solace?

History remembers her, of course, because of her father’s wealth, because of La Banque de France. Because she had the whimsy and the means to build a pretty pink house on the sea. 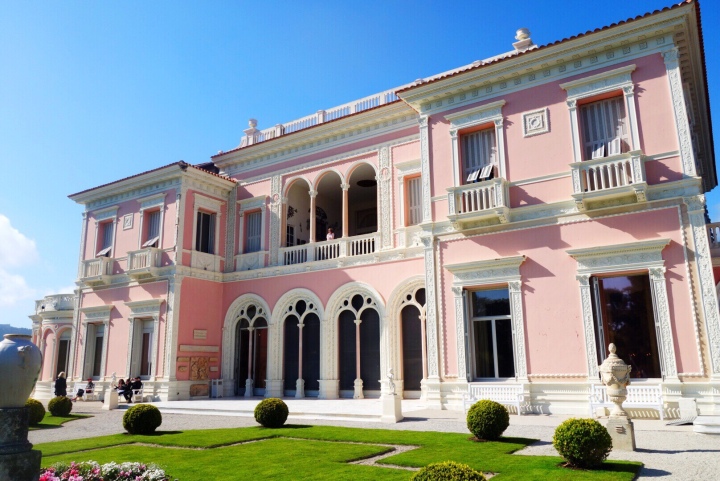 Some other facts: she was married at 19 to a friend of her father’s, much older than she. Her husband gave her a disease that left her unable to have children, and his serious gambling addiction threatened the marriage until it broke, culminating in divorce in 1904. 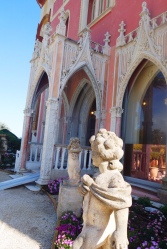 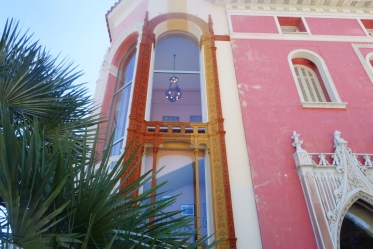 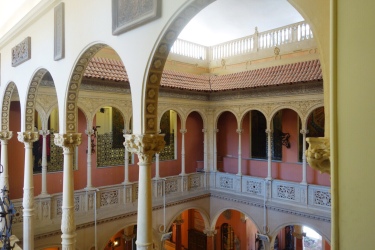 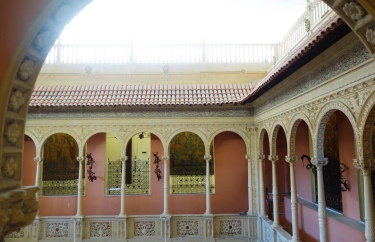 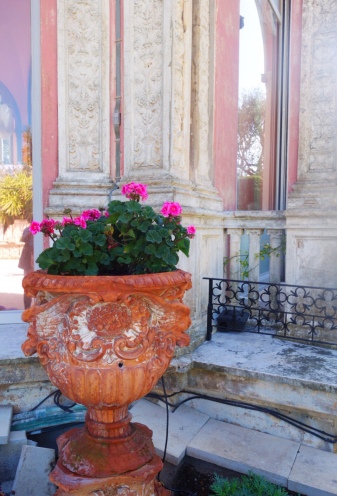 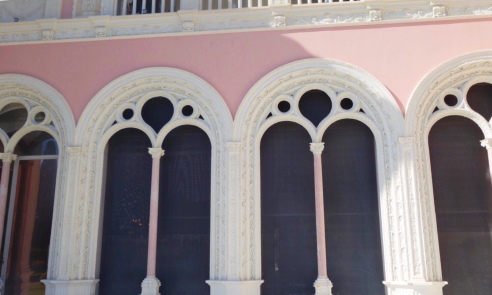 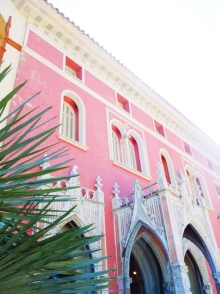 We love to glamorize the wealthy and dead, as if fine clothes and cakes work to redeem suffering.

Tour the Villa with Exploring Provence

4 thoughts on “a vision in pink: the mediterranean villa fit for a baroness”