One day during our honeymoon in Switzerland, we drove to Täsch and then took a train to Zermatt, which is where you visit if you want to see the famed Matterhorn, sometimes referred to as the Mountain of Mountains, or Berg de Berge in German. As we walked Zermatt’s long main street to reach the lift that would take us to the Matterhorn “glacier paradise,” we noticed that signs were all in German. In the windows of Bäckerei were Grittibänz, those cute golden bread men. We were greeted with hallo instead of bonjour.

I was delighted that only an hour’s drive from our French-speaking base of Crans-Montana could have us land in a town that felt so completely German. What I didn’t find out until later was that, during our short trip, we had crossed what’s known in Swiss German as the Röstigraben. Rösti is a simple Swiss potato dish, like a big hash brown. Röstigraben (potato ditch, essentially) is a lighthearted term for the barrier that divides the French and German-speaking parts of the canton. It is not merely linguistic, but often refers to differences in attitude and voting habits by the people on either side (think Bible Belt, or New Yorkers vs Southerners). Similarly, there is a term for the divide between German-speaking Switzerland and the Italian-speaking canton of Ticino: polentagraben. 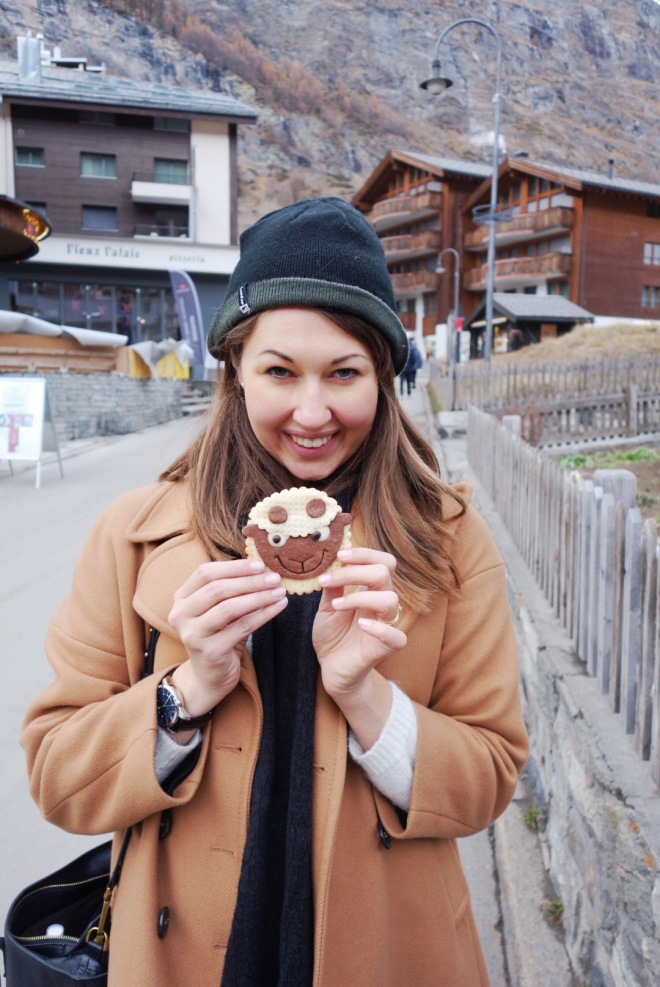 The Matterhorn looms over Zermatt. The mountain is an iconic symbol of the Swiss alps with its distinctive crooked-pyramid shape. It’s the mountain you find on a bar of Toblerone, and its Disney copycat in Anaheim has drawn many fans, who get to “bobsled” down the twists and turns of the small-scale depiction. To my eyes, the mountain has personality, a quirky look that reminds me of Harry Potter‘s Sorting Hat. If I am to characterize the Matterhorn, though, I would be wrong not to mention its dark side. Scaling the heights of the Matterhorn has tempted climbers since 1865, when it was first successfully ascended. (Though this success is relative. Seven men attempted the climb, only three made it back).

This ascent of the Matterhorn marked the end of the “golden age of alpinism,” since the mountain was one of the last major peaks in the Alps yet to be ascended.

In Zermatt today is a small cemetery at the foot of a church. It seems to contain only the graves of those who have lost their lives trying to tackle the Matterhorn or other nearby mountains. The Matterhorn itself has claimed about 500 lives since its first “successful” ascent. Some of the graves are decorated with gear, such as a small iron cross looped with rope and an ice pick.

We didn’t have much time to look around, though, as we needed to get to the gondola. It was approaching noon, and the ride to the top would take a full 45 minutes. At that altitude, nighttime comes early and falls like a hammer. 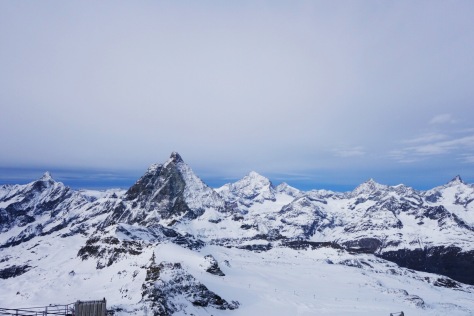 The Matterhorn Express is billed as the “world’s highest 3S cableway.” The brochure promises it’s “like flying.” At 82 CHF a pop (about 72 euros right now), we thought it better be. Funnily enough, that was practically the budget option. There are cars offering champagne and comfortable leather seats or a full fondue meal, should you so choose. Talk about lunch with a view.

Once at the top, we stepped out of the gondola and into Italy, just over the border. The “glacier paradise” is a real feat of engineering: there is a restaurant, gallery of ice sculptures, and cinema, inside of an actual glacier. One of the features of a glacier is that it is subject to motion, probably a very slow descent down the mountain. If temperatures should ever cool dramatically, I’m guessing there will be no more glacier paradise. But for now, pretty neat. Lunch was simple, some tomato soup and rösti, but pricy. When you think about what it takes to get those ingredients up to that altitude though, I guess it can be forgiven.

The best part was the view, a panorama where fourteen glaciers and thirty-eight high peaks are visible. I couldn’t stay out on the platform for long. My thin wool coat didn’t do much to combat the 5 degree Fahrenheit wind. When you start to uncomfortably ponder how it would feel to freeze to death, you should go inside.

Speaking of freezing to death, there is a cool show available on Netflix called The Horn, which we watched with rapt interest after our visit. It’s a docu-series about Air Zermatt, the alpine rescue team employed to rescue errant skiers and others who encounter danger on the mountain. In the first, teeth-clenching episode, the team attempts to rescue a skier who has fallen into a 100-foot crevasse.