This is how the Italian at the hostel’s front desk responds when I tell him where I went yesterday.

He tells me it’s a nothing city. Nothing to do; a village on the map because of a big tower, not worth going out of your way.

I appreciate the honesty of Damiano’s opinion. Stuffy hotel concierge he is not. And I can see what he means. Pisa is quite small, lost somewhere after miles and miles of highway. It’s not a place to build your trip around, but a worthy stop on the way somewhere else.

And I wouldn’t call it shit. 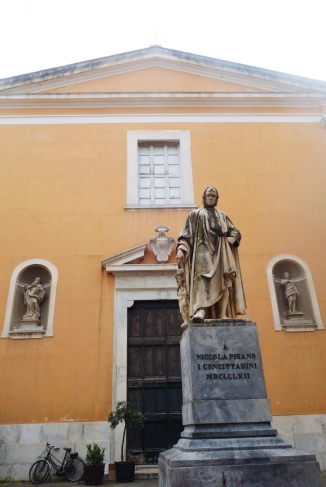 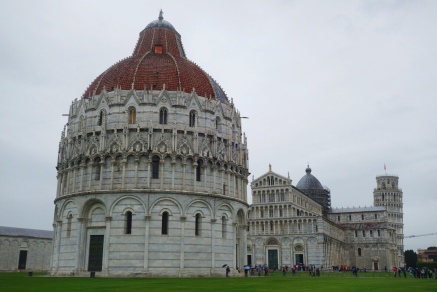 Yesterday featured gray, gloomy skies. I left the hostel and met Victor in the car. We had no plan.

“I have something to propose to you.” (French syntax thrills me still).

“Would you like to go see the Leaning Tower of Pisa?” He had the route marked on Maps. “It could be originale. We’re actually really close.”

Delighted, of course I said pourquoi pas. Our proximity to Pisa was not something I had considered. The location, within Italy, of the city that houses the “world’s most famous tower” (their distinction), had never crossed my mind, truth be told. It could have been on the other side of the country for all I knew.

But here we were, just an hour and a half away.

After a lot of highway, we park in Pisa and immediately buy an umbrella from a guy hawking them in the lot. I’m already shivering, dressed for Cinque Terre sun. My dress, so nice for the beach, now looks like optimism or stubborn ignorance. Vabbè.

The streets remind me of streets in Florence, all mustard yellows, dark greens and browns, rows of windows with neat shutters. I wonder if these colors are a regional thing, or just an Italian thing. I haven’t seen enough Italy yet to know.

We walk down a long shopping street to the river, crossing occasional proud churches, looming reminders of the past. My favorite is a paradox of lacy white marble.

We find a quirky gift shop–salt and pepper shakers in the shape of Vespas–and Victor buys me a mug with a Pisa tower as the handle. I can’t remember the last time I got a souvenir so unabashedly obvious, so I HEART NEW YORK. This mug is anything but demure. Its unjaded tourism appeals to me.

We eat at a place named for Danté, outside near a heat lamp. We have Campari spritzes (way too bitter for this American), Tuscan cheese and jam on a bed of super-peppery arugula, and finally, pizzas that we can barely finish. 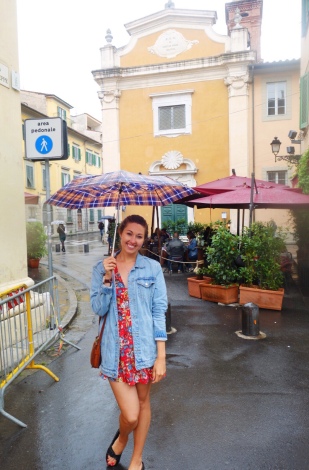 Then (it feels late but isn’t, so gray) we hunt down the tower. It hides pretty well for such a big structure. You can’t see it from everywhere in town, as we had lazily imagined. 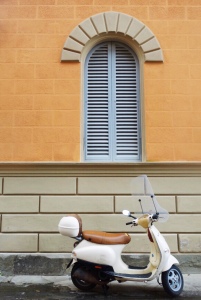 Around a corner, there’s a peek. Then there it is, the tall clumsy structure that put Pisa on the map. 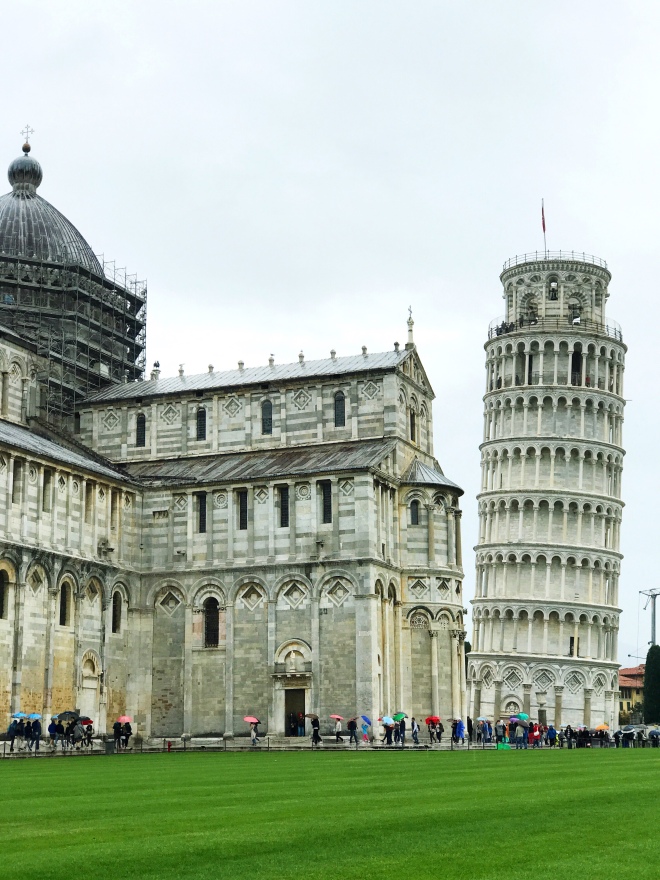 Speckled with cold rain, we take absolutely no time to learn about the history or climb the steps to the top in the bitter wind.

“Wow, it’s pretty,” and “it really does lean” are some of my scintillating observations.

Not every trip has to be educational.

Victor and I amuse ourselves by watching hordes of people trying to ‘hold up the tower’ in what is now perhaps the most unoriginal travel photo op in the world.

Not everyone is a natural. An American woman sighs and snaps, “Jim! Move to the left! No!”

Finally he gets it right, arms craned towards the sky, squinting from the effort. “Oooh,” the woman crows. “That’s good.”

I snicker, but then Victor makes me recreate this photo. It’s as lame as I expected, my hands far from “touching” the tower.

“Well,” Victor says. “It looks like it’s falling and you’re ready to catch it.” 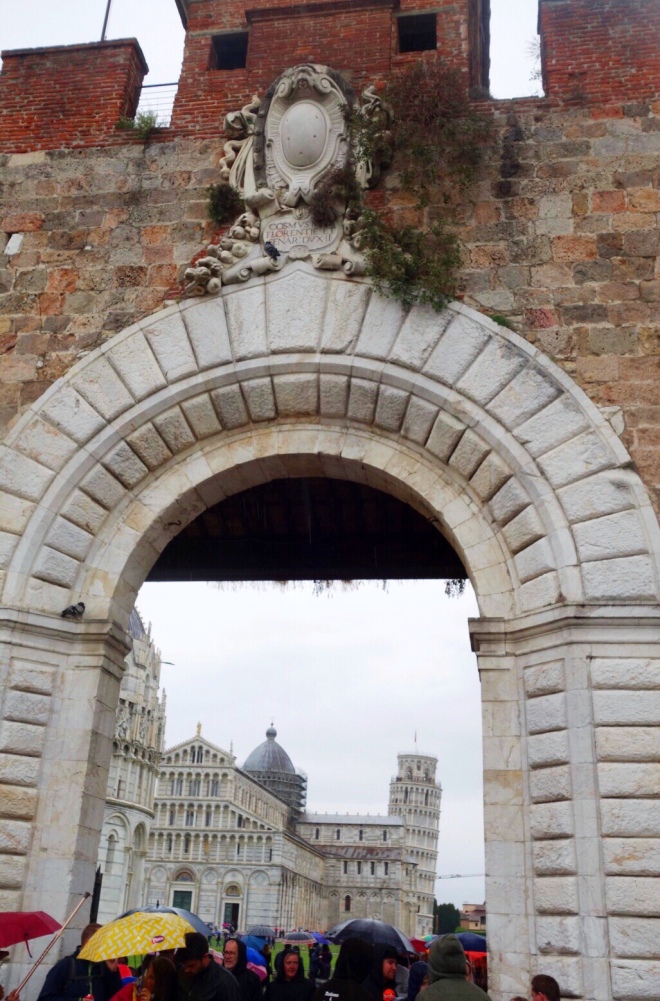 At home, I learn that the word “Pisa” comes from the Greek for “marshy land.” 12th-century architects apparently disregarded the area’s mushy subsoil while constructing this tall, heavy belltower meant to crown the “Field of Miracles,” where the city would display the treasures freshly stolen from Sicily.

In a case of pride before folly, one side of the tower began to sink during construction of the second story. It was too late to go back, so the builders continued with some trepidation. Despite efforts to correct the problem, the tower kept its stubborn lean, and baffled builders halted work for close to a century. 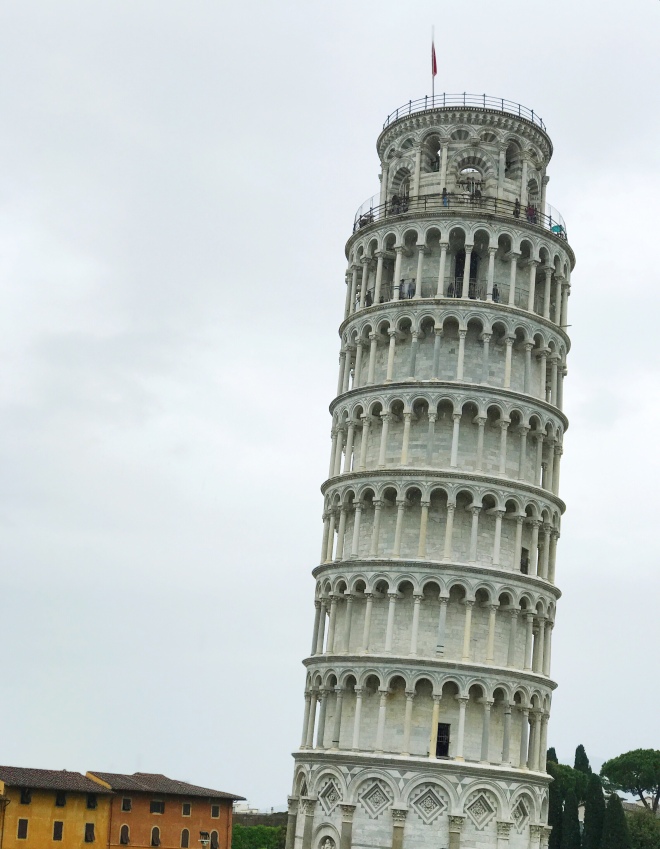 I learn too that Mussolini hated Pisa’s leaning tower, considering it, in no uncertain terms, a disgrace and an embarrassment to Italy’s reputation. His plan to fix the tower backfired, as the grout and mortar introduced to straighten out the lean only caused the structure to sink more heavily into the ground–its awkward angle even more pronounced.

Learning this makes me appreciate the structure even more. Already I admired its stacks of columns, graceful and impractical as a wedding cake. Now there’s an emotional appeal. Sweet little underdog with a quirk no one could correct. There’s a lesson in there somewhere.